Updated every 5 minutes with the latest real estate for sale in Flower Mound - including MLS listings, homes, condos, townhomes, investment property, and land - as posted by Flower Mound real estate agents and brokers - over 30% more listings than Zillow, Realtor, Trulia, and Redfin.

Get Signed Up Now  to receive new listings, price changes, and recent sales prices - with the ability to get daily, weekly, bi weekly, or monthly email updates.

Get Signed Up Now   and get the latest Flower Mound tax and HUD foreclosures, REO properties, bank owned homes, and short sales being offered at HUGE price reductions and significantly lower than retail value.

A close suburb of Fort Worth, Flower Mound can safely say that its is part of Texas' most valued community. Fort Worth is the fifth largest city in Texas. It finds itself nestled snuggly a point in a metropolis triangle composed of Arlington, Dallas and itself.

The city of Fort Worth was founded in 1849 as an Army outpost on a cliff overlooking the Trinity River. To this day, Fort Worth and its close hamlets manage to embrace their western heritage and their cowboy like architectural and design.

Following the "Treaty of Bird" (a document between the native Indian tribes and the Republic of Texas in 1843), a line of Army Forts were established around the Texan/Mexican border. A way to preserve a level of safety for ranchers and settlers in this area. A conjunction of posts that were pivotal for the defense of the land during the Mexican- American war in 1846-1847.

To this day, Fort Worth, one of the first outpost in the area is known as "where the West begins."

Following that bloody skirmish, Fort Worth began to deal in cattle and became a thriving mercantile town. The ranchers and their rich industry used the town at the nucleus for their "cattle drives." A way-station to not only sell their herds but properly spearhead them to other climates. It rapidly started gardening a reputation as a town on the outskirts of civilization that was onto itself quite reputable and refined.

The borough and its suburbs started edging out; hotels, casinos, bars, general stores, hospitals and the comforts of big city life in the American Frontier became a standard by which Fort Worth built its reputation.

Flower Mound, meanwhile, decided to skip most of the turmoil and progress, finding its way to the future by a completely different manner. Established "off the books" in 1840, Flower Mound began as a rural religious community. A presbyterian secluded society that for more than a decade later was kept up by a steady stream of pilgrims and a dwindling population. It wasn't until the tail end of the 1970's that Flower Mound began to carve out a niche in the Dallas-Fort Worth area. The completion of the Grapevine Lake, plus the addition of highways that lead directly to the area's most affluential International Airport started to take its toll. In less than 30 years, Flower Mound became one of the most densely populated suburbs in the region.

Flower Mound has always garnered praise and laurels. Its municipal government has managed to bestow upon it a degree of sparkle that few, if any, suburbs in the area have acquired. Among its highest honors, Flower Mound maintains a vigilant love for nature (after all, the hamlet was named for a 12.5-acre (5.1 ha) hill brimming with wildflowers - big bluestem, little bluestem, and Indian grasses). A love that has cultivated over 50 parks and open air venues in the region. Its second trophy to fame is its continued investment in public network trails.

In 2012, Flower Mound was ranked number 8 as one of Dallas' best suburbs.

The investment and wealth of career opportunities by local business and conglomerates (Best Buy HQ and Stryker Communications employee over two thousand), its academic excellence, plus its proximity to two of Texas premiere metropolises have also bequeathed Flower Mound with other national acclaims.

In 2006, author Bert Sperling named Flower Mound one of the "Best of the Best" in his book Best Places to Raise Your Family. He further elaborated that: "Flower Mound is the best places for big houses on a budget.”

The Fort Worth area has a humid subtropical climate. A system that onto itself suffers the tweaks of a desert environment. Still, despite the heat in other close by regions, Flower Mound experiences the traits of a micro-climate. Its situation in the basin of the Trinity River, plus its proximity to the Grapevine Lake and Marshall Creek, encourage an onset of light breezes on balmy summer days. Winter are cold, with extreme morning chills in January; the temperature dipping below zero. Summers are hot and scorching. Flower Mound experiences lightning fast precipitations, and quick thunderstorms (some of which can evolve to tornadoes).

Flower Mound's shopping district is mostly located on Cross Timber Road. The right shops and boutiques needed to maintain a house and a family friendly home. Meanwhile, for more jet setting and socialite fare, Southlake next door offers up an all-you-can-eat buffet of trendy stores. Also, on each of Flower Mound's cardinal points, you'll discover a brand heavy shopping pavilion.

Flower Mound has busy culinary agenda. Within its boundaries it has amassed an army of restaurants, and just outside its frontiers, a step or two in any direction and the pioneering adventurer might find him or herself in an impossible situation. A palate that has suddenly discovered it has chewed, bitten or partaken more than it could. Southlake, just across the lake, is one of the areas top epicurean sanctuaries. A turn of the speedometer and a new collection of miles on the family station-wagon, at you'll find yourself neck deep in Dallas and Fort Worth. Your belly and imagination marveling at the possibilities.

Flower Mound is a peaceful quaint, people of the earth, type of community. Its nightlife is family friendly and PG-13. Yet, due to its location, Flower Mound has become the proverbial pilot fish. A district stuck in the underbelly of a school of after-hours Great Whites; sharks known as, Dallas, Fort Worth, and Southlake.

Flower Mound, Fort Worth and Dallas are passageways of tourist worthy landmarks. Both cities figuring high in the nation's patriotic soul. Fort Worth, due to its cityscapes and its rural embrace of its western part is a jumbled bag of awe-inspiring points of interest.

Flower Mound is the sort of community one can safely raise a family. A hamlet of moral integrity where your compass is never lead astray. Meanwhile, for a refreshing jaunt on the wild side, Flower Mound is conveniently situated near some of Texas most raucous neighborhoods.

Be the first to know when new Flower Mound short sales, foreclosures, deeply discounted homes, and brand new hot properties come onto the market before anyone else - over 30% more listings than Trulia, Zillow and Realtor.

Get Signed Up Now!

Do you own a home in Flower Mound and want to find out instantly and completely free what it is worth in today's market - with absolutely no cost or obligation?

Get Your Instant Value Now!

Whether you need to get pre-approved for a mortgage, deal with a savvy buyers agent to find the perfect home, or an experienced listing agent to get your home sold...

Welcome Home to this stunning two-story, nestled in the desirable Bryn Mar Estates and zoned to FMHS. Upon entering you are greeted with soaring ceilings, fresh neutral p...

This must-see home is perfectly positioned in a quiet cul-de-sac; No thru-traffic! The home and street are adorned with mature shade trees. Sparkling swimming pool provid...

SPRAWLING SINGLE-STORY on a QUIET CUL-DE-SAC STREET in the HEART OF FLOWER MOUND! There's room for the whole family in this charming 4 bedroom home graced with a flexib l...

This home has it all and more! Sitting on a corner lot, in the highly desirable Terracina neighborhood of Flower Mound and conveniently located to the shopping and restau...

Courtesy of Compass RE Texas, LLC

Fabulous move-in ready home on a quiet cul-de-sac in beautiful Pecan Acres. This is the perfect home to raise a growing family with plenty of room for everyone. Stepping ...

Courtesy of Your Home Free LLC

Looking for the perfect home in the perfect place? Chances are you'll want to check here first. 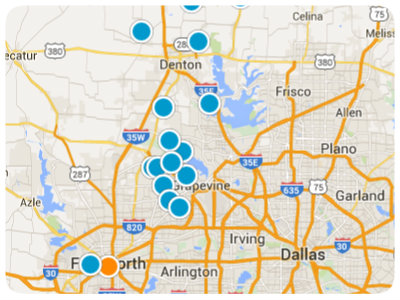